Skip to main content
Popular
Digital Camera World is supported by its audience. When you purchase through links on our site, we may earn an affiliate commission. Learn more 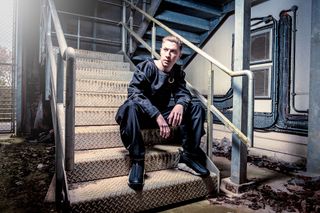 I first picked up a DSLR about seven or eight years ago, and instantly found a new passion and energy allowing me to be creative. I had been making films on larger HDV cameras for a fair few years so a lot of the basic skills were already there.

Creating video projects in the past had become laborious and tiresome, but for me photography was something fast, fun and easy. It has given me a platform where I have more control over how I express myself, from choosing the genres I work within, the people involved, right down to the final look and feel of the image. I’m able to take full responsibility for the entire process and outcome.

We all have something to express and photography must now be the number one way to do that for so many people. I began simply with a Canon EOS 5D MkII and a 50mm lens and shot images on the streets with friends mainly trying to create fashion based photos.

Later, I picked up Canon’s 24-105 F4 which gave me a little more freedom. I continued shooting fashion for a long time and eventually was able to get by making a living from it (just about!).

I developed quite a clean but edgy style and used the outdoors for the majority of the time with minimal kit or lighting. In recent years, I have focused far more on personal projects and documentary work. I worry far less about capturing clean images with perfectly clean backdrops which has given me a new style and invigoration to capture and create.

This was an image I shot quite early on, in the first couple years of my photography journey. The main shoot was for a props hire company – The Prop Factory. They had lots of products that needed advertising so the majority of the afternoon was used to create those images.

Typically once I’ve done my job and everything is in the can I’ll try to nab ten minutes shooting some portraits of my own at the end. This was one of them. I had borrowed a Canon 17-40mm F4 as I knew there was a lot to get in the shot and at the time I didn’t have a wide lens of my own, only my 50mm. I loved the new perspective it gave so just decided to shoot with it all day.

This is a more recent image from 2018. Bath University fashion designer Alice Honeychurch commissioned me to shoot the final project of her degree. The range made from sustainable fabric entitled ‘Leave Human Footprints’ was just so cool. I had spent the last few years working for CLIC Sargent again shooting their sustainable fashion range so it was something I was well practised in by this point.

I think as creatives we constantly run on self doubt, and always worry whether we can deliver the goods and continue to get better. I’ve come to realise that when you work as a creative it’s not a linear trajectory of just getting better each shoot. Some days things go well, sometimes not so much – and that’s OK.

The reason I’ve included this image is because I remember it being one of the first times I had total faith that everything was going to be fine. See more here from this shoot here https://www.instagram.com/alistaircampbellphoto/

Last year (2019), I decided to take some time out and go travelling for a few weeks. For all street photography I shoot on my Fujifilm (X-T2 at the time). I think Asia must be the number one place in the world for street photography. It’s absolutely insane. I defy anyone to go to Asia and not take awesome photos of beautiful scenery, incredible people with a story behind every face and amazing ancient architecture.

But I’m not really about that, I don’t want the photos that everyone else has. We had just spent three wild nights in Bangkok and our heads were paying the price. We travelled north for a much more chilled few days in Chiang Mai. Here we went to the night market and one of the first things I saw was this little boy asleep in a cage while his family sold enough from their stall to get by.

I really couldn’t believe it. I guess to the young boy it was just another night at the market, but it made me stop and reflect on the different situations we all find ourselves in.

Back home now, in Bristol. If I’m going out I’ll take my camera with me most of the time. I’ve tried not taking it a few times and missed many opportunities, but I’m also conscious that you can’t live your life down a lens. I’m quite a hermit if left to my own devices, but I like to go out with just one lens and one battery. Once the battery is dead that’s the end, a good compromise!

On this particular day I had my Fuji 35mm F2. I had walked past a filthy exit to a nightclub when I just saw some hands holding a coffee cup poking out from the doorway. As I passed I saw a very shy and timid man. I walked on, his demeanor suggested that he didn’t want to speak. But as I looked back he was looking down the street and I caught a glimpse of someone I felt may want to talk.

I sat down with him and asked if he wanted another coffee – he said no. As we began to speak he told me how he was originally from Swansea but was out on bail. I didn’t ask what he had done, it didn’t matter. He said he came to Bristol so he wasn’t around the same people anymore. He then asked me if I had a telephoto lens, and said he knew a little bit about photography a long time ago. I said it wasn’t able to zoom in or out but took the most beautiful shots. ‘It’s new’ I said, ‘mind if I ‘show you?’ I then took two photos, one portrait and this wider shot of the scene.

I later went on to sell a print of it for a few hundred pounds at an auction and donated the money to Help Bristol’s Homeless project. It was later picked up by the BIPP and I was invited to represent Team UK in the documentary category at the Photographic World Cup in Rome later this year. The majority of my documentary work is black and white, including my entire website. Sean’s is the only one I’ve ever felt is better in colour. It somehow feels more real.

I’ve come full circle. I’d spent a few years shooting creative character portraits and promotional images by now. This was a recent shoot and although similar to my early work, feels a lot more representative of me. I don’t think my photography itself has improved much, but my editing has.

It was a difficult shoot with a super limited scene to shoot in – believe it or not it was just a corner of an office, and we dressed the set as best as we could with some limited resources.

My favourite part about this shoot was working with Mariana and Ines. If I remember rightly they were both from Portugal. I had never worked with either of them before but they were both amazing. I’m not sure if they had seen my work previously but they just instantly dived straight into my style. I hardly had to say a word, it was almost telepathic.

The relationship between the two characters was so much fun to push and play with. In other parts of the shoot we had awkward poses and angles you’d never dream try, but everything just worked. Posing models with props can be so difficult and can dominate an image if you’re not careful, but I think I’ve finally learnt to not worry.